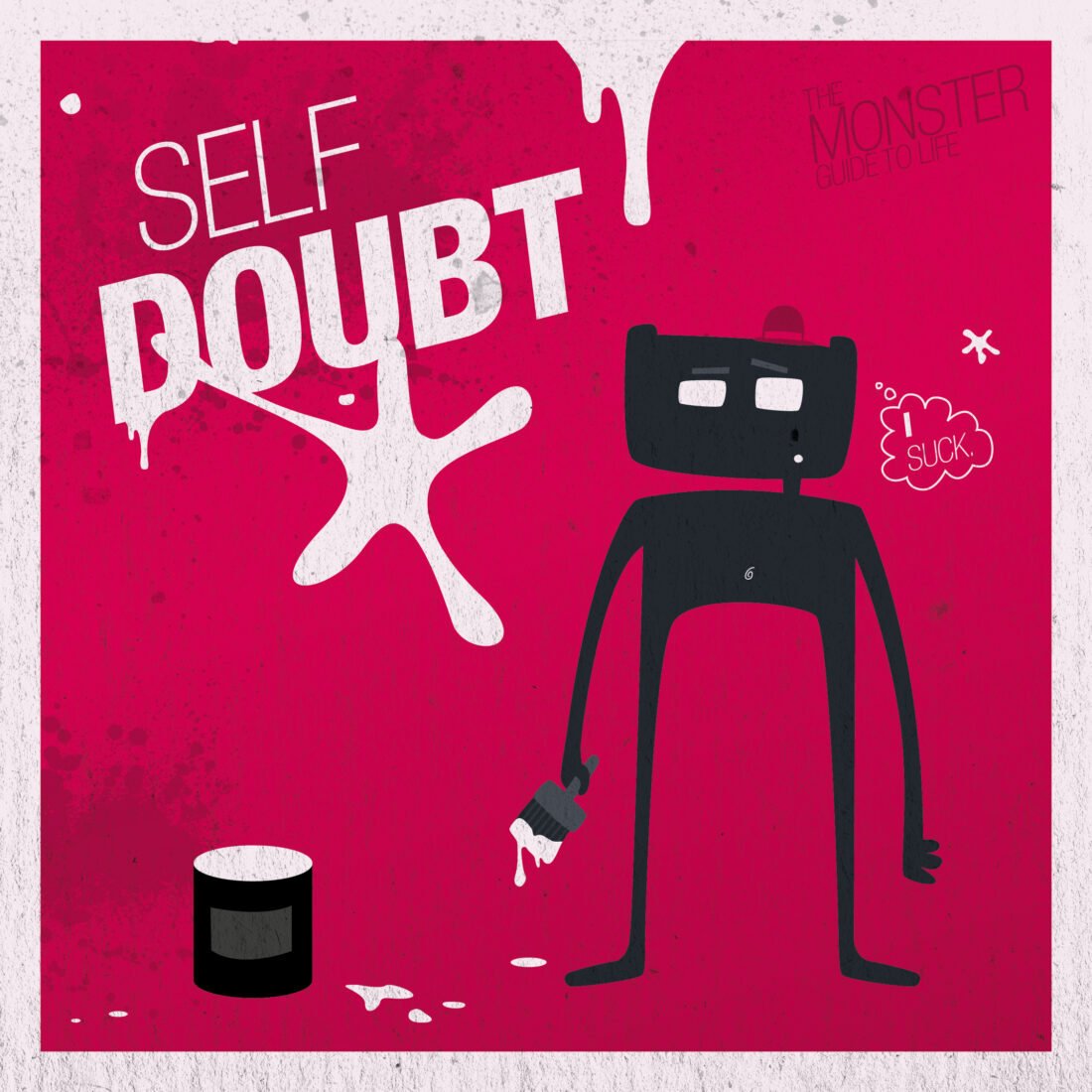 Self-doubt, a strange intrusive version of ourselves. I’ve struggled with this as I imagine we all have. It’s a lesson we face throughout our lives to varying degrees.

It’s recent incarnation for me is not something I accepted until I did. And then, for a while it was all I could think about. I’m pretty sure they call that anxiety. Fucker right? The awareness of self-doubt created even more. Balls.

The weird thing is, I have my insecurities of course, but I’ve always been quite decisive and confident in my ‘choices’. Everything kinda ‘works out’ so I’ve always kept faith in that. It took losing my sense of self to lose that part of me. It’s really fucking annoying actually, catching myself second guessing my instincts, questioning my ideas, seeking reassurance, validation and approval from others for what I already know deep down. Even the simplest of things can get a self-doubt make-over. I wanted to understand this shift in dynamics.

Why?! Why now?! It fucks me off. Especially given I know what it’s like to not feel this way. To not question every decision I make or thought I have. My mission is to nullify this new found problem I’ve been having the past few years. I understand why its arrived, the external and internal forces, and have dealt with those, but the process of fighting its lingering after affect and getting back to a more decisive approach to life continues.

I want to be that guy who was more assertive again, more sure of himself and confident in his values, in his choices. The guy who took far less shit from others and certainly himself. I’ve been there and done that before, I can do it again.

A few years ago I started writing a book, talking about all the shit that changed me and caused this increased sense of self-doubt. How I was navigating my way out of the hole I found myself in. I spent countless hours writing, hundreds of pages. There was version after version after version. In the end I canned it.

As much as I believed my intentions were good and I felt those notes would help people as they had me, it always felt too personal, too self-absorbed, too who gives a fuck?! (Perhaps it still is like that – you tell me?!). It wasn’t just self-doubt talking on those occasions, it was conscience. It pulled on those values, blurring the lines between self-belief and self-doubt. As much as I wanted to share, I knew that need was also driven by a cry for help rather than just a desire to help others because I wasn’t myself.

As I traversed this weird feeling it later morphed into the idea of setting up a support group, pass on some of what I’d learned during this specific mental crisis I’d had and how I got there. I was healed, I felt like a survivor having soaked up and processed the trauma around me and what it brought out within. I was heading back to myself and figured my painful lessons could potentially help or prevent others like me going through the same. But the more I thought about it the more I crippled once again between self-doubt and conscience, never quite knowing which was which.

Fast forward a couple years and The Monsters were born. Just last week in fact.

You see, that’s what I’ve learned about self doubt. Mine anyway. If I think too much about something, play out the pros and cons in my mind about an idea or feeling too much, I manage to talk myself out of it.

I have this strange conflict where day to day I’m not overly concerned with what negative things others could think, what could go wrong, the potential failure involved. I’ve always been proud of that fact because I believe for the most part I’m an open-minded decent enough human-being. Yet because that part of me has been suffocated my self-belief plummeted and self-doubt grew. Now I do worry about others opinions, the sense of letting someone down, hurting someone’s feelings, of triggering a negative response in someone toward me becomes very apparent sometimes.

I generally choose to consider others before myself, I choose to keep the peace. I’ve been told too much by many people that I shouldn’t. Which I need to listen to, because for many years I knew this and found a balance that worked, a self-belief with accountability attached. This new ‘people pleasing’ angle is a codependency response. That biting my tongue in order to keep the peace has direct links to past trauma as a kid as well as my recent present. A trait I got over then and one I’m learning to do again.

In general I see putting those I love first as a good quality, nothing will change that belief, but there’s a line between healthy consideration for others and sacrificing self. You can’t diminish self for others all the time – even for love. I know this, I lived this way, so it shouldn’t be that difficult to do again right? It isn’t being respectful to yourself or being authentic living this way – and authenticity is my life blood. Going against that messes me up big time, and is precisely the reason why I ended up with a higher than usual dose of self-doubt and anxiety driven panic-attacks.

Whilst considering this bought of ‘self doubt’ and how to combat it, I remembered something from when it wasn’t so prevalent – I had less of it when I had more trust in self. A trust anchored in my values, in who I was. A weird self-belief that wouldn’t allow time to second guess so much because it came from what I believed to be a good place. A kind of unconscious faith hardened out of trial and error.

Self-doubt will always be a challenge, mistakes will be made, this Monster thing may well be one of them – but it doesn’t matter. It feels right, so why not? We all know that to be decisive requires a little faith and trust in ourselves, in our present. Great in theory, not always easy in practice.

In order to tackle self-doubt head on we need to act before we have the chance to overthink it too much. Question our thoughts from a conscience point of view for sure, but not overdo it. That way, it’s done. It’s out there. Trust can then build within ourselves and self-doubt can dissipate.

For me, being present allows for that, to feel gratitude, to be proud of ourselves in our daily and past achievements, no matter how small – increasing self-belief.

Be bold. Be brave. Be unafraid of showing yourself.

I doubted and deliberated ‘The Monsters’ of course, still do, this weird reflective adventure I’m on as a would-be-writer. I changed the title of it a few times, I question article topics and content, but in the end I just say fuck it. When I had the idea originally it felt right. The outcome is irrelevant, the doing regardless is challenging that self-doubt within.

The anatomy of self-doubt itself is a minefield. It has a way of keeping us in our comfort zones, not challenging ourselves enough which denies us personal growth. The not knowing is the scary bit, the bit we strive to get beyond.

We often demonise self-doubt within ourselves, talk down to ourselves for even experiencing it, which only acts to emphasise it’s hold on us. It can easily overlap with our conscience too, something that’s there to tap us on our shoulder in a good way. Self-doubt itself seems to latch onto our goals, our dreams, some grand achievement or need that seems to be in the distant future, out of our grasp.

Switching focus away from the bigger picture that self-doubt loves so much allows us to be more present and less focussed on the doubt itself.

Whether it’s love, trust, trying something new, making changes, reaching for something that feels out of our grasp. What gets us past it is often a tiny bit of faith. To just do it, regardless of the outcome. Which is shitty news because faith requires so much from us with no guarantees. That there is the self-doubt ball-buster.

Pausing in our effort as we tackle self-doubt is essential, knowing that pausing isn’t failure is equally. Despite what self-doubt tells us, the act of pausing more often than not pays-off with a burst of motivation, a heightened sense of self-belief and further growth or productivity afterwards.

Breaks are self-care in action. Not forcing things, preventing burning out, being content with the process as we attempt to ‘do’. The sense of achievement, the reward, it isn’t in the end goal at all, whatever that may be. It isn’t a set time in the future, it isn’t a tall mountain we get to stick our flag in. It’s pretty sudden. One day you realise you’ve achieved something and that perceived mountain is actually far behind you. You get a sudden feeling of ‘what was I worrying about?’.

Being present is the only way I’ve found to really challenge self-doubt effectively. Something I try and remind myself of every day. It’s easier to spot the opportunities for growth and feel that sense of achievement and self-belief.

The ‘achievement’ is actually in all of the doing. The struggle, the breaks, the falling down and getting back up, all the tiny efforts involved along the way, not some mystical, final, end result that our self-doubt latches onto and tries to tell us we can’t achieve.

Being present allows us to tackle that, to feel gratitude, to be proud of ourselves in our daily and past achievements, no matter how small – increasing self-belief.

I guess that’s the moral of my self-doubt story – to be present as much as we can be. To keep going and make conscious leaps of faith to be decisive. Learning as we go.

Decisiveness in Monster theory is summed up as – “It’s better to ask for forgiveness than permission” – The will to expose ourselves and accept any outcome, believing that what we’re doing is right. This doesn’t mean being irresponsible, immoral or carefree. That ‘will’ is grounded in our values – which should include respect. For self, and for others.

Would love to hear your tips on tackling self-doubt. How do you deal with it? How do you silence those intrusive thoughts?

Thanks for reading.
Believe in yourself people.