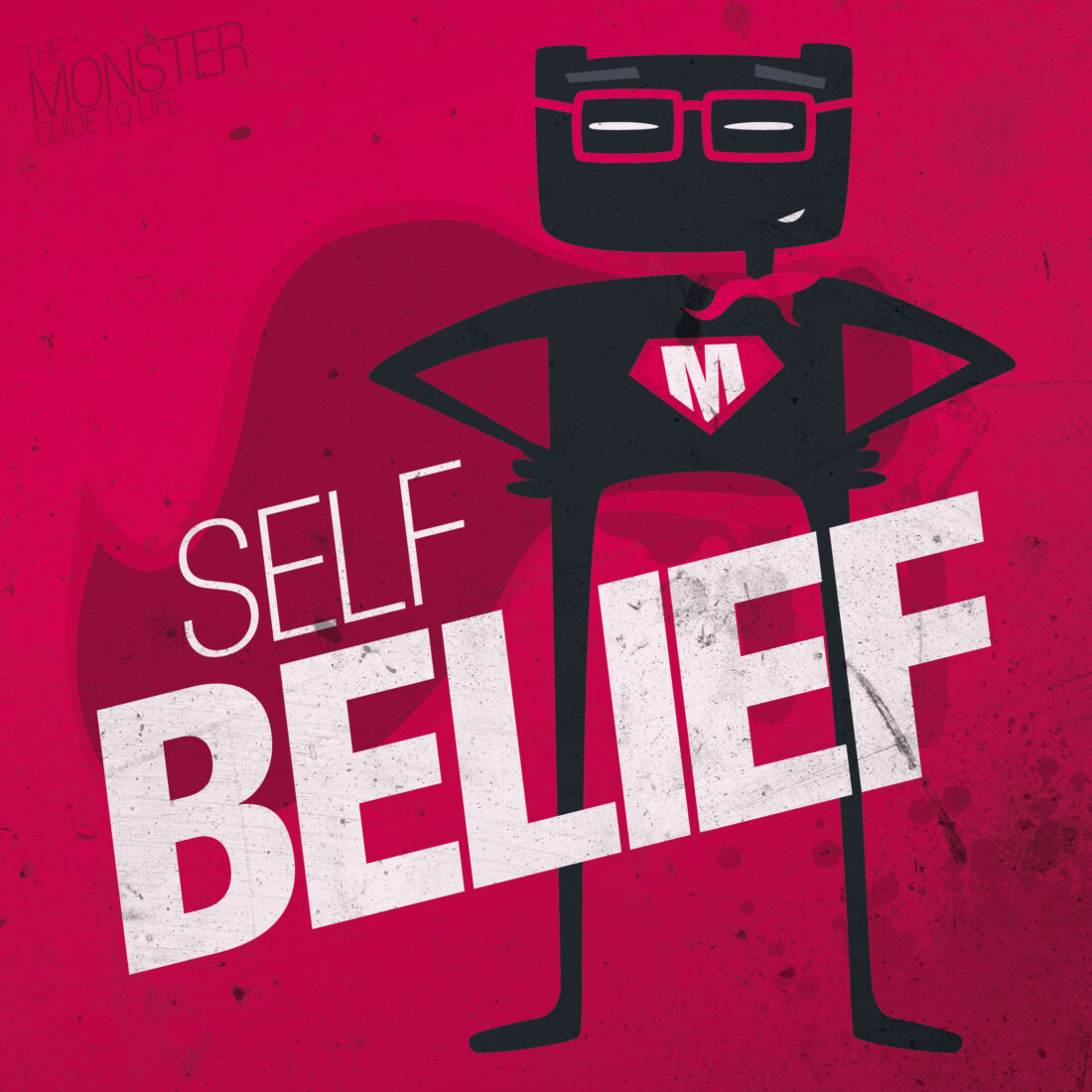 The Monsters are adamant, to believe in ourselves as humans is wonderful thing.

It’s one of those things that can look very different depending on the circumstance and the human. I find myself wondering about its origins, it’s evolution. Is it more of a modern day concept given how much we’ve evolved and how much the world has changed? Was self-belief in cave men (and women) a thing or was it simply about survival instincts way back when?

And what about the animal kingdom? There are obvious signs of emotions and behavioural characteristics in the animal world, especially those more closely related to us. Is that really just about size and strength, instinct, survival of the fittest, or is there more going on? Are animal’s even capable of the concept of ‘self’?

Darwin believed they were - “The difference in mind between man and the higher animals, great as it is, certainly is one of degree and not of kind.``

The difference between humans and other animals when it comes to our consciousness isn’t so black and white. Animals may not ponder life and death in the same way we do, but they may well have some sense of self which would suggest self-belief and self-doubt could form part of their actions and behaviours, affect their decision making. I personally believe there is a lot more going on in animals cognitive function that we arrogant, all-knowing humans give them credit for.

Take the notion that fish can’t think or feel for fucks sake. What bullshit. It seems clear to me that that is just a way for us humans to justify the industrial slaughter and mistreatment of aquatic life for our own benefit. If they can’t feel – it doesn’t matter. Ggrrrr humanity sometimes. Who the fuck are we to…aaaanyway, I digress, literally nothing to do with self-belief, let’s get back on track…

As a human I find my own relationship with self belief a strange one. I’ve always had a weird completely subconscious belief in myself, a confidence and optimism I can’t quantify or explain. It’s when my consciousness kicks in that self-belief seems to get questioned in someway. So I wonder how much of that is genetics & evolution, how much is shaped by experience and my idea of ‘self’.

The self-belief I mention is best described as what we are as kids. As kids we have no reason to be unconfident or question our values, our thinking or ourselves. We generally just do, freely and unapologetically. Follow our heart, our instinct and desire to be happy, have fun, enjoy life etc. We aren’t aware that’s what we’re doing at the time, but that’s the basic principle. Our survival, care and protection is left up to those primary care givers of ours. Their handling of our exuberance becomes our early experience, so theirs a lot our parents can influence with regards to our self-belief as adults. Thankfully my folks gave me a pretty good start in life.

It’s only as we get older, as life experience happens and brain function develops that our essence of confidence, self-belief and who we are shifts. It can become a greyer and greyer area. When we talk about our ‘inner child’ it’s often to reference the need to chill out, be more confident, have more fun, ‘let go’. And in doing so, in just doing as we did as kids often feels incredibly liberating and boosts our self-belief and inner confidence.

Which is great – but there’s more to it than that. We all know we can’t behave like children as adults, those fuckers didn’t have it all right, it’s not all about having fun and being unapologetically confident. We can’t function as adults in society with the self-centred nature of kids, the irresponsibility, the tantrums, attention seeking, excessive outbursts, not getting our own way, throwing our toys out of the pram – that can breed all sorts of gubbins within us as adults.

So self-belief and confidence becomes shaped by our values and positive experiences as we grow up and navigate our way through life..

Let me explain – I’m a ‘creative type’, creativity weaves through all aspects of my life; work, hobbies, relationships, my living space, everything. In that world, especially professionally you’re constantly faced with comparison. It’s actually that way for all of us, creative type or not (It’s just an analogy).

There are so many amazingly creative people out there. When I was first started my business it was daunting, so much talent and here’s me, 20 years old, not knowing my own style, not doing anything I deemed worthy in comparison to others. You can become bogged down in wishing you had their talent. Often thinking to yourself ‘fuck, that was a great idea, wish I’d come up with that’ or ‘fuck, I’m shit, I wish I could draw like that’. And so on…

The arch enemy of self-belief is self-doubt. The common denominator being ‘self’. Too much of either can turn them into other things; arrogance, egocentrism, narcissism, anxiety, creative block, writers block...crippling demotivation.

As I found my way in my career I experienced all of these on some level, they were valuable lessons at a young age. I quickly learned to stop comparing myself, my own stuff to other people and theirs. Instead of wishing I could do what they did I admired and respected their talent. The feeling of not being good enough dissipated. Which freed me up to express myself and tap into my own creativity.

I applied this logic to everything else in life too, to myself, and it worked a treat. It isn’t about what others think at all, accept that opinions will be diverse, from appreciative to completely not fussed, even hate. It becomes about us, anything I do is purely for personal fulfilment and happiness. That’s all the validation I need. There are things I do that I like and don’t like. Ironically, the things a like the least can be things that others like the most. That’s the weird beauty of it.

So confidence and self-belief are really just about doing, the action and experience of self expression, it grows from being ourselves. From trust in ourselves. The outcome of it and response of others is irrelevant.

My relationship with self belief has evolved as I have. I have self-belief yet I have this ball and chain around everything I do. That ball chain is my conscience. A whisper in my ear, reminding me not to be too confident because that can easily turn into ego and arrogance and equally not to be too critical (of self and others), not to doubt or judge myself too much because actually I’m good at what I do and I’m a good human. Which is more than enough.

I imagine this is something we all have going on in our noggins. It’s certainly a conversation I’ve had many times with other creatives over the years. And in fact when you realise it’s the same for everyone, that’s a big part of you letting go of the pressures, of the need to impress, be something you’re not and accepting yourself for who you are – warts n’ all. This relating to others and knowing that you’re not alone in this struggle is actually where you find some additional validation, gratitude and of course self-belief.

When you stop comparing yourself to others (and the last thing you did) and just do you, the pressure and fear of failure dissipates, freeing you up for trial and error, the freedom to be yourself and the fulfilment and happiness that brings. Doubtful voices are always there, but it’s a good thing, they keep us grounded and humble.

It always ebbs and flows between self-belief and self-doubt, which is actually healthy for us. Being grounded is important, it helps prevent the inevitable more extreme swing that happens between crippling self-doubt and inflated ego, which tend to come hand in hand.