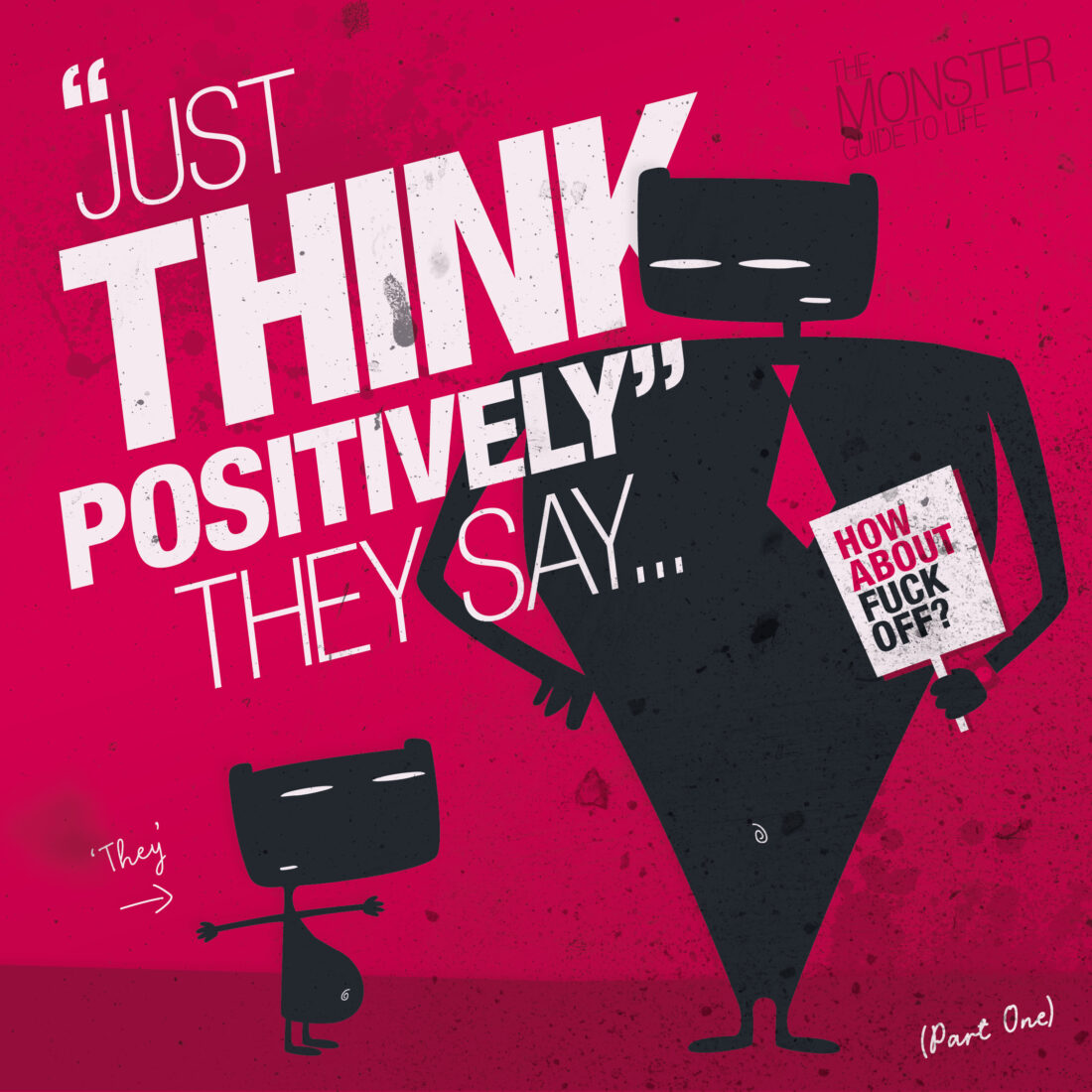 20 July 2021 In Being Human, Conversations Worth Having, Life Lessons, Mental Health

Being positive all the time is bullshit. It just means we’re living in Fakenewsland, a false reality where we happily avoid the shit that actually matters. Shit that prevents us from having genuine positive thoughts and experiences.

Let’s be real – life is brutally shit sometimes. That’s normal, the same for us all to more or less a degree. To deny it and rely on false positivity is actually damaging to us humans, our brains ain’t stupid. ‘Faking it’ grates against our authenticity, storing up the difficult stuff. That feeling eats away at us, preventing our true self from being.

But. Sometimes, being positive when we’re far from feeling that way is a necessity.

Real positivity is largely about acceptance and letting go, being authentically us – accepting what comes and goes in life, the good and the excruciatingly shit – whilst being unscathed enough to keep being us. Easy to say, but some emotions are difficult.

Being happy isn’t a given. It isn’t a once in a life time achievement award. We work at our happiness, daily, just as we work at our sadness. We need both in order to appreciate life and feel authentic. Working to heal the latter so we may encourage the former. ‘Pretending’ everything is okay, sweeping under the rug, dismissing the difficult in favour of being ‘positive’ makes it that much harder to be ourselves.

So true positivity (for Monsters) is about acceptance of self, others, what happens (or doesn’t happen) and all the positives and negatives that brings. It’s a juggling act between seeing the good and bad in something and moving on with our lives, or, ignoring the bad in something and being shackled by it in some way.

It may sound box of frogs like, but we should think negatively and positively.

Just not over do either. 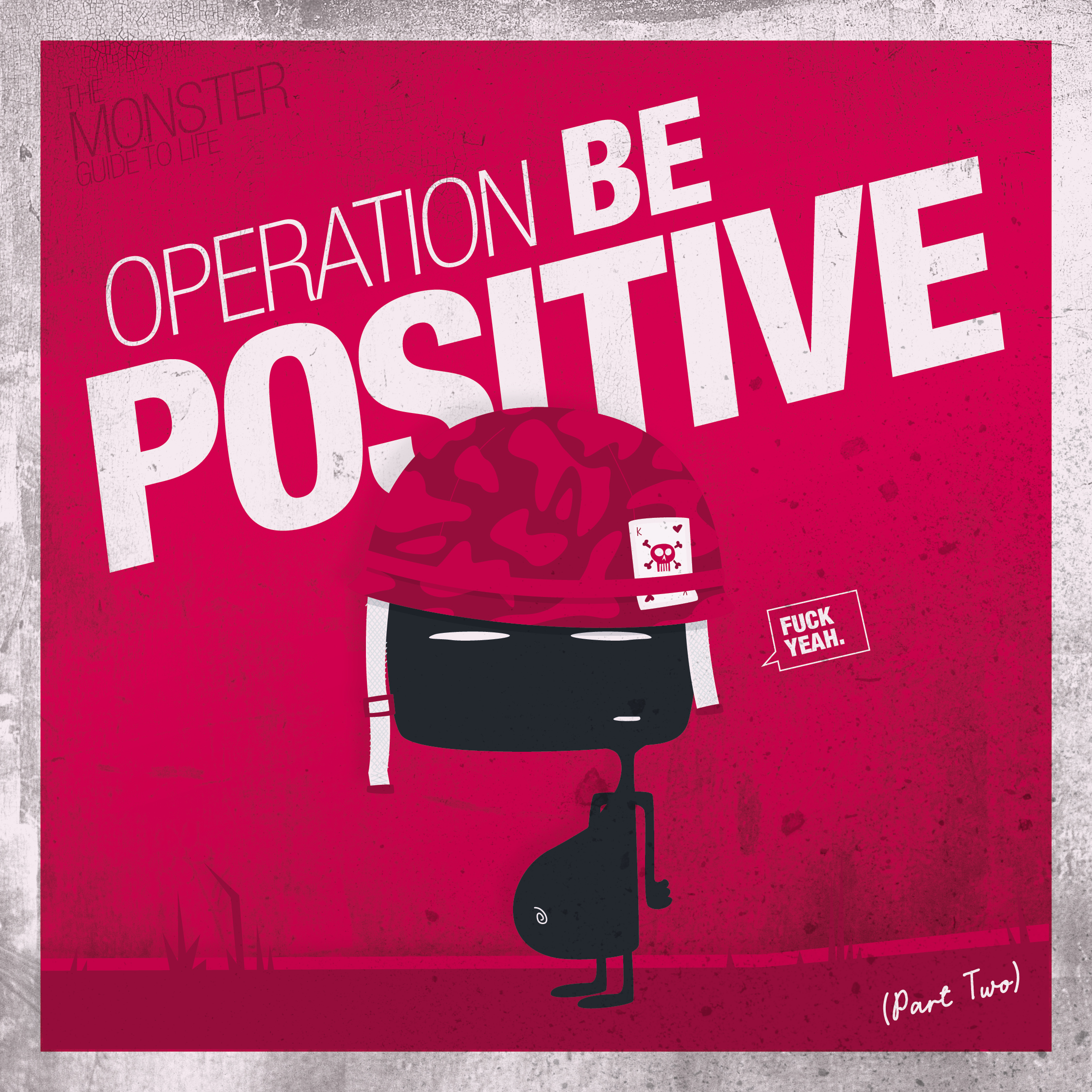 Aside from *having* positive feelings about something, when is ‘thinking positively’ (when we’re not feeling that way) actually a good thing?

Sometimes in life, finding anything to be positive about can feel like a fucking mission. Our necessity to survive far outweighs anything else.

Sometimes being positive is simply about getting ourselves through a difficult moment, a challenge or scary situation. That can be anything. Literally anything. Doing so increases our confidence and self-worth which is never a bad thing whether we feel that shit at the time or not.

In other words, sometimes we have to ‘fake it to make it’. We need to go against our fears and doubts, choose to think positively whether we feel that way or not, using ‘positive thinking’ to drag ourselves *through* something rather than using it as something we hide behind.

That’s where we need to be careful, there’s a big difference, hiding behind positivity is the potentially damaging bit, okay in moderation but not as a main course at life’s dining table.

Both of those acknowledgments have positive connotations for the self and the thing that we’re facing. Not being ready isn’t failure, it’s acceptance of our *current* limits. It’s self-awareness, it’s strength and courage, self-love and growth, it’s “Not now, but maybe next time”.

Sometimes we have nothing to feel positive about. And that’s positively okay. 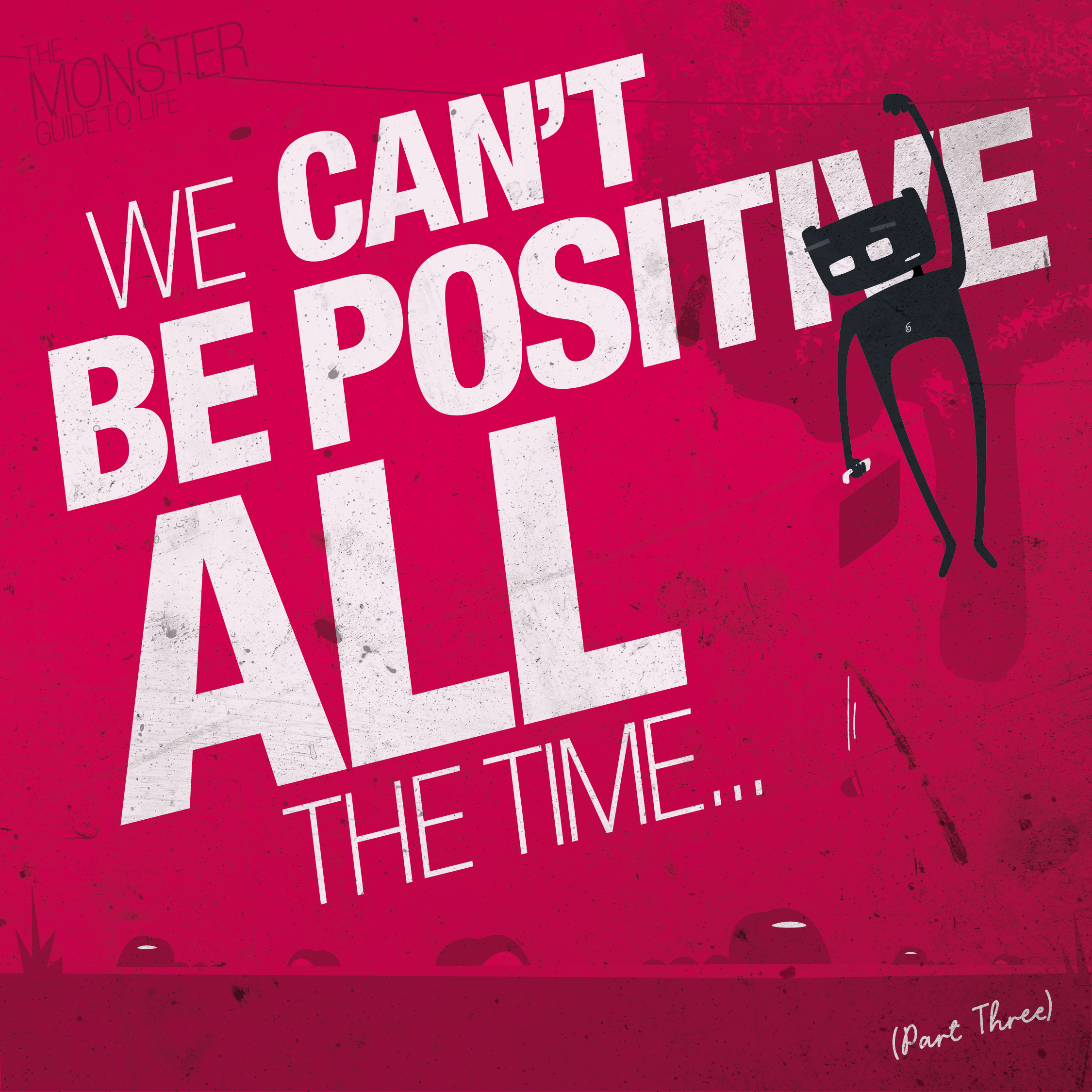 We can’t be positive all the time, and we shouldn’t. It’s unrealistic.

We can’t be anything all of the time. Life isn’t a stagnant creek where crocs lurk underneath its surface ready to chomp on our leg and drag our sorry-ass to shore to slowly eat us later (as much as we may feel like it is at times).

What we can do is hold-on through the thrashing about every once in a while with a ‘fuck you smile’ of false positivity on our face, knowing that when we’re done, we’ll go back and deal with it. Turn it inside out and let go.

As we do so, our confidence and sense of self grows. Our self-judgment and negative chit-chat dissipates, making room for better; authentic feelings of positivity about ourselves and what we encounter and accomplish every single day.

Thinking positively isn’t about making light of something to make ourselves feel better. Doing so may take the negative away for a while, but it never lasts. Positive thinking becomes a habit out of accepting and doing. Dealing with shit through our desire to be ourselves and be happy. Whatever that looks and feels like, it isn’t burdened.

It does fluctuate though, we’re all making our way to basing decisions on our happiness rather than our survival.

Using fear to fuel that desire makes us far more pervious to negative thinking. Which is what this is truly about: False positivity masks negativity. Whereas true positivity accepts it, smells it, tastes it, swallows some and spits the rest out. Nullifying its legacy on us.

Creating space in our minds, and in our hearts, for better things.

Oh, and one last word of advice. It’s okay (pretty healthy in fact) to say to yourself ‘c’mon think positive’ – but don’t under any circumstance say that shit to someone else. Especially Monsters, they’ll likely stab you in the face with whatever they can lay their hands on (Illustratively speaking of course).