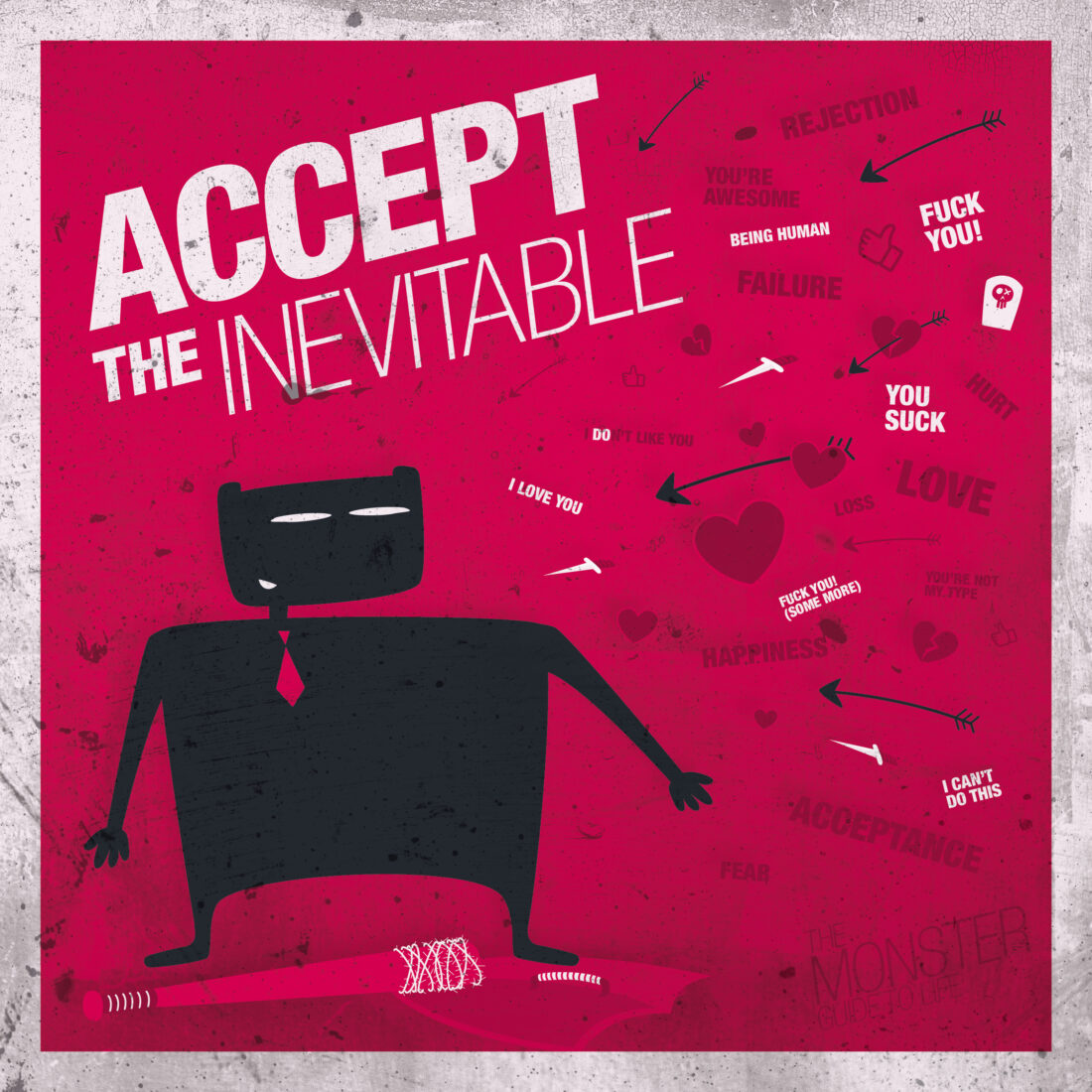 The Monsters have many philosophies, ‘Accept the inevitable’ is one that intrinsically weaves through their approach to life.

It’s about accepting the future whatever it brings and being okay with it.

It’s about accepting the future whatever it brings and being okay with it. The things that happen in life inside and outside of a Monsters own remit – disappointment, sadness, excitement, happiness, guilt, failure, triumphs, love, loss, falling down, getting back up, doubt, the unknown, change, things not going their way, other people and their actions, opinions, assumptions, feelings, words…

It’s about accepting that things end and begin again. That things don’t always go to plan or work out the way they would prefer in their life, work, friendships, families, relationships – the world. And of course death – the bitterest of inevitable’s to swallow.

(Having said that, perhaps the Monsters will live on forever, even after their creator has long left this life behind – hhmmm)

Accepting the inevitable is about going with the flow, about living freely, as freely as anyone can at least. In a world where, when you dig deep enough, you realise true freedom rarely exists (even in our own minds sometimes).

It’s accepting that they are insignificant whilst having the power to change the world.

It’s about knowing that when things end it’s probably for the best, even if they really didn’t want it to and the pain of it felt too strong to bear.

It’s about knowing it’ll be okay afterwards as it was the last time. That pain heals. It’s about knowing that new opportunities present themselves, new doors will open up, that life has a habit of carrying on and working itself out. And that they will be okay one way or another, that they will not only survive but flourish as they have done before.

It’s about knowing self, their strengths and weaknesses and being prepared to leave a situation when being yourself is no longer viable. A job, a relationship, an environment that simply creates too much friction in life. This doesn’t mean a monster isn’t committed, it doesn’t mean a monster doesn’t give it there all, or isn’t strong enough to withstand external pressures, it isn’t a ‘grass is greener’ situation. It’s accepting that things happen and remaining as their Monster self.

It’s about trusting in themselves, their values and following that heart of theirs. Keeping faith in their intentions, the stubbornness of their love and passion in their ambitions. It’s about paying attention, being present and mindful of themselves and the world around them, using their heart not their easily led and manipulated thoughts to guide them and instruct their choices.

It’s about being unaffected and uninfluenced by the negativities of others toward them. It’s knowing what is their responsibility to burden, to work on and what isn’t. Making right what is. Letting go of what’s not, so as not to pay it forward.

It’s about accepting the diversity of life, that everyone is as uniquely insignificant yet capable as they are. It’s knowing that they will argue, debate, disagree and be wrong as much as they’re right. That they’ll be disliked, unloved, hated and not everyone’s cup of tea. That they will be misjudged and misunderstood, by themselves too. It’s about knowing that that doesn’t matter and is more than okay, because for every person that cheers against us theirs someone who cheers for us.

It’s about seeing themselves and the world around them transparently and finding the strength to live in that world as honestly, humbly and authentically as they can. To continually learn and be open minded, to keep going and powering through what life shows them. Accepting the inevitability that they too will fail, make their own mistakes, that they don’t have all the answers and that they won’t always live up to or practice their own philosophies.

It’s knowing that that’s okay and that their philosophies can evolve and adapt with new experiences forming new perspectives, that having these philosophies at all means they have something, some viable substance and meaning in self and in life.

A set of beliefs and values that they can always fall back on in times of crisis. An inner guidebook, a roadmap, tried and tested all their lives to keep them grounded and safe. It has its coffee stains, its rips and its torn edges. It’s faded detail and revised theories, but it’s there. It’s always been there and always will be there. Regardless of the route it takes them on.

It’s about standing in the present, looking down upon this route, their very own hand drawn, lived out loud roadmap which carries the evidence of all their previous abject failures and successes that reminds them of all this. Keeps them safe and sound, present and prepared for what’s to come. Ready and waiting, to accept the inevitable.

It’s accepting others, knowing that they’re doing exactly the same.